As technology improves and culture changes, savvy business owners and executives make it a point to lead their company in time with the march of history. This is evident by the constantly changing landscape of the workplace. The environment in which both employees and their superiors work greatly factor in the direction the business takes to realize its vision.

To fully understand this evolving relationship between the office space and the workers, a retrospective of the workplace becomes necessary.

The Industrial Turn of the Century 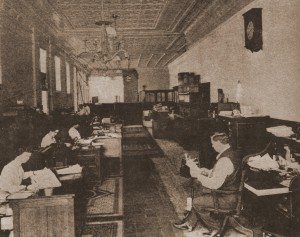 With the Industrial Revolution having already spread across the developed world and firmly set its influences in businesses, companies grew to unprecedented sizes in private firms. Like the many factories that sprung up in the 19thcentury, businesses that had clerical duties designed systems that capitalized on the great number of employees doing simple and repetitive tasks.

The factory analogy also worked with the way offices were then designed, as employees’ desks were lined up in rows and columns that allowed for easy supervision by the management and straightforward communication between workers when they need to pass along messages and documents.

Productivity was high for its time, but the setup of scores of people all doing the same work without any sense of privacy or flexibility certainly restricted opportunities for innovation while also “dehumanizing” the individuals as merely cogs in a well-oiled machine. 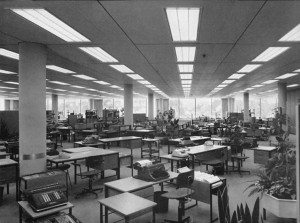 The 60s were a tumultuous period, witnessing social upheavals that inevitably rippled across the commercial sphere, affecting the way people did business. Employees started earning more input on how company processes were constructed as well as more autonomy when it came to their individual duties. The communication lines between the management and their subordinates became much shorter, and workers on equal footing found themselves collaborating on group projects.

Reflecting the shifting dynamics of the workplace were its layout and aesthetics, as pioneered by the German designers of the time in the form of the landscape office. Instead of the assembly line setup of earlier decades, the landscape office featured semi-enclosed spaces for two or three employees to share and larger units with similarly oriented tasks being more clearly delineated for specialization. Heads of specific departments worked more closely with their juniors.

A careful balance of independence and cooperation for more groundbreaking yet still productive work was achieved. The downsides to this arrangement, however, were more of a practical nature, as small spaces were ill-fitted for such designs and the cost of structuring the office to these blueprints did not come cheap. The advancement in technology with the coming of the personal computer and its dramatic effects on the work flow also wasn’t foreseen.

Perhaps it is no big surprise that the rising importance of the individual in the workplace coincided with the acceptance of the personal computer in the realm of business. With more responsibilities given and more work expected from a single employee, the office design of the 80s and 90s placed a greater emphasis on giving workers more of their own space to do their jobs. With the growing number of skilled talent who earned more independence but have yet to deserve a room all on their own, the answer was the cubicle.

Instead of having to share a desk with other people, an employee got an enclosed space all to himself so that he could focus on his work. Managers did not, however, want to altogether abandon the collaborative aspect of the office. Cubicles were then designed so that all that separated colleagues were the very walls of their personal spaces. They could still walk to their neighboring employees or look over their partitions if they had to talk and get things done together.

The tools that became available to office workers allowed them to accomplish multiple tasks without having to leave their cubicles, leading to more productivity. The layout also maximized the available space on the office floor, cutting back on the costs that drove up expenses with the earlier workplace designs.

The problems of an operation running this scheme were that it still ended up discouraging face-to-face communication between employees that is so integral in forming strong professional relationships, and as a result, alienating the individual. Being boxed up in a tight space and knowing the rest are in the exact same situation led to this cold image that is strangely reminiscent of the Industrial outfits in the beginning of the century. 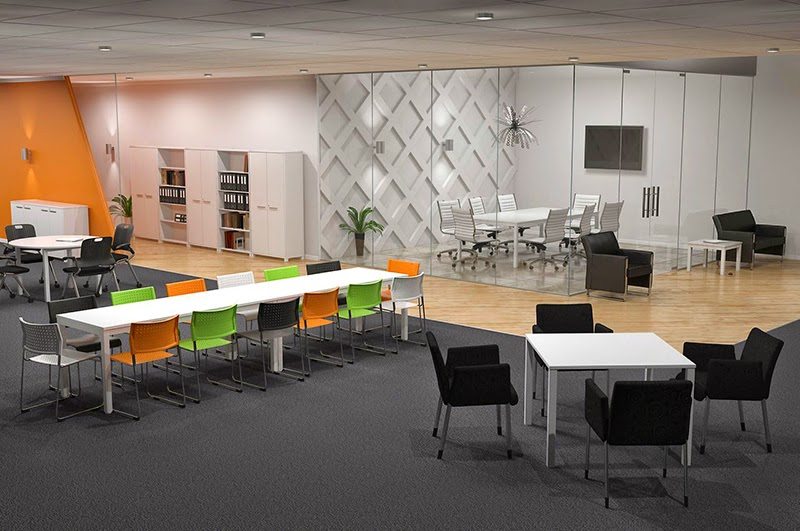 Although the dot com burst in 2001 tempered many experts’ expectations, business owners that survived, along with tech-savvy young entrepreneurs and forward-thinking thought leaders of the early 00s, still saw the great potential the Internet had in changing the way people worked and, ultimately, lived. Change in the way the workplace was designed inevitably came with these exciting times.

The backlash to the cube farm was quick, as the trendiest companies tore down those walls to facilitate the human connection that would spark a great many innovations through collaboration and technology. Instead of the antiseptic utilitarian form that symbolized drudgery in the previous decades’ offices, the 00s sought more open spaces bathed in sunlight and allowed for a more casual relationship between coworkers and bosses. 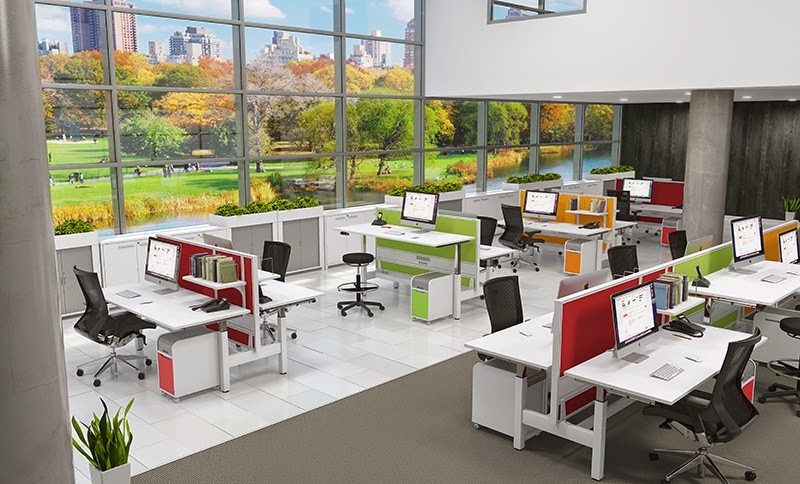 Businesses wanted to be desired by the younger market of talent, and thus appealed to the more liberated sensibilities of the new generation fresh out of college by promising all sorts of “cool” perks and amenities. Flexible working hours, game rooms, and in-house chefs to cook meals and snacks are just some of the incentives these companies offer to would-be Sean Parkers, Tom Andersons, and Chris DeWolfes.

This renewed focus on establishing bonds between coworkers has welcomed the return of shared tables to encourage teamwork. Chairs and sometimes even desks are on wheels to make it convenient for one employee to just slide next to another if they need to talk.

Of course, accommodations for strategic meetings that require privacy and less noise are also accounted for with smaller rooms containing boardroom tables and walled off by glass or other barriers.

Every inch of the office is mapped out so that people are constantly in contact with one another, fostering a culture of brainstorming and the sharing of ideas. Health issues have begun to be addressed more widely as well, with chairs and desks having ergonomic designs taken into consideration when furnishing the workplace.

There is a potential that all these privileges and spaces for collaboration may lead to more distractions and thus less productivity. With the knowledge gained from looking back at the history of the workplace, the right adjustments should then be made to achieve the perfect balance between the freedom of cooperation and the discipline of delivering results for better future-proofing of the office design.