The modern office doesn’t divvy out spaces based on an idea of individual ownership. The concept of that person’s desk, that person’s cubicle, and that person’s office is fast disappearing. Instead, more and more businesses are providing a flexibility of space for the modern worker to switch between as they need. This means that you can create different zones within the workplace for individual work and for collaborative work. But what about when you need both at the same time? This is why it’s worth looking at the Motion Team.

The meeting of two worlds

It’s simple enough to divide the workspace needs up to private, individual tasks and more open, collaborative work. But that doesn’t address the mixes that lie in between. Sometimes, a team of colleagues working together need their individual space. Clusters of people will each need their own workstation and their own screen to focus on, but they will also need the ability to communicate with the other members of their team when it suits them. The Team is a closed chamber, fitting four chairs and four workstations. On either side, two workers sit with their backs facing their colleagues.

This setup means that they can focus on their individual work as they need, but it’s easier to turn to their colleagues when they need to. It creates a dynamic form of communication suited for teams that work individually but collaborate often. 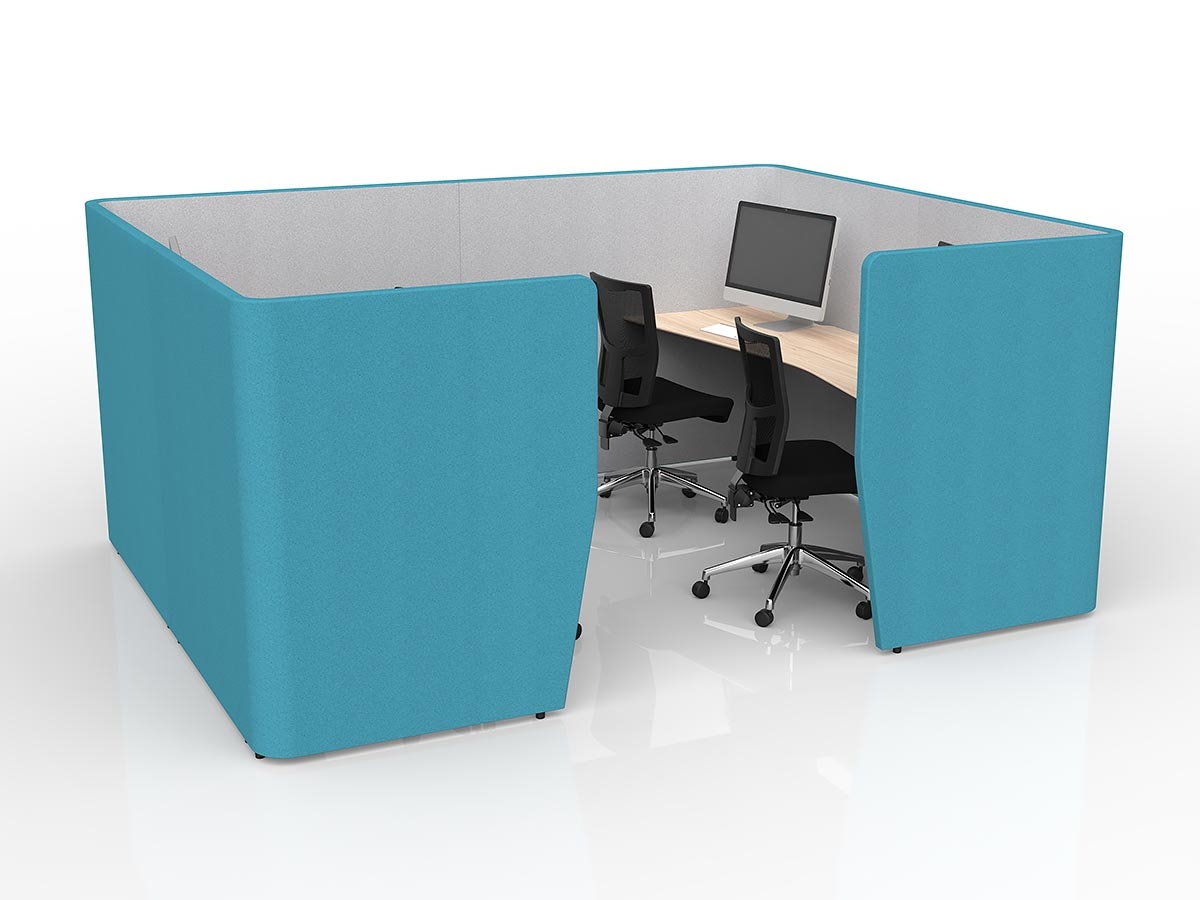 You might think that it would be more effective to do away with the walls and simply give four open desks that the team can sit around. For one, the wraparound nature of the Motion Team saves a lot of space this would otherwise eat up. Flexible offices need a certain amount of room free to be able to move different modules and create zones prioritizing different kinds of work. But the truth is that the Team is designed for those clusters of individual teammates that work best with one another but without the distraction of the rest of the office.

They might share a project, with each of the four responsible for individual parts of its completion which require their undivided attention. However, if they hit a bottleneck or a roadblock, they can easily turn to one of those colleagues for the solution they need. It creates a communication-as-you-need-it relationship that isn’t too distracting but also isn’t too isolating. Meanwhile, the wraparound walls provide acoustic privacy, so their attention is focused on the work at hand.

Having a selection of open spaces and closed spaces often isn’t enough to fit the dynamic styles of work needed in the modern office. You need different zones that fit different numbers of people with different needs for communication. The Motion Team is the perfect option for those small teams that have their own tasks to be getting on with, but with the occasional need for collaboration. Separating them would create barriers to communication while having them out in the open would be a drain on the focus they need. The Team hits two birds with one stone.