‘Little boxes on the hillside, little boxes made of ticky tacky…’ 1960s protest song against sprawling suburbia, a hit for Pete Seeger

Is this a recipe for Australian icon status? The Ettamogah Pub meets Alice in Wonderland, Don Quixote, a treehouse, a brown paper bag and a madman’s breakfast? A Dr Seuss kid’s book come to life? The Mad Hatter’s tea party? Some kind of Lord of the Rings Middle Earth fantasy?

This is the kind of stir the Dr Chau Chak Wing Building at University of Technology Sydney, caused when it materialised from the amazing mind of the world’s most famous living architect, or ‘starchitect’, Frank Gehry, now 86, who has been known to give critics the middle finger and describe most buildings designed today as ‘pure shit’. 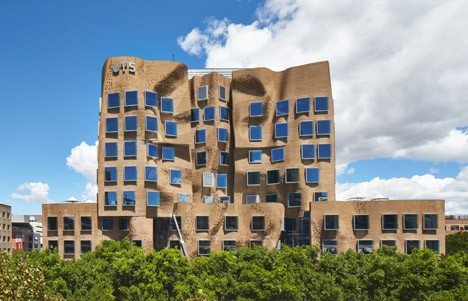 The Chau Chak building, Australia’s first Gehry design, was opened in February 2015 by the Governor-General, Peter Cosgrove, who described it as “the most beautiful squashed brown paper bag I’ve ever seen”.

Back in 2012, columnist Mike Carlton called the building a rain-sodden clump of cardboard cartons left out for a council clean-up. To Germaine Greer it was an insult to the city’s colonial buildings, and Fairfax architecture critic Elizabeth Farrelly called it ‘bad Gaudi’.

Little boxes are anathema to the vision of Gehry, a Canadian-American, who delivered a defiant middle finger to a Spanish journalist who asked if his designs were “just about spectacle”. He retorted: “Ninety-eight per cent of everything that is built today is pure shit. There’s no sense of design, no respect for humanity or for anything else. They are damn buildings and that’s it.” He later apologised, attributing his outspokenness to jetlag and fatigue.

So who is Frank Gehry? Australians would say “he’s a bit of a character” but like Don Quixote, he defies those who would pigeon-hole him.

As mentioned above, he’s the man who gives critics the finger. His critics often claim he puts form over function but Gehry grins and gives the American one-finger signal. That’s ‘Up Yours Mate’ in Australian. 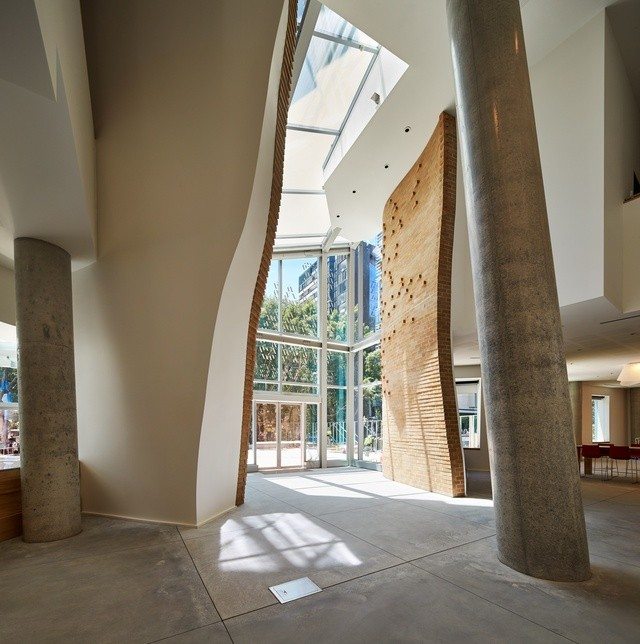 Of his designs he says: “I can’t help it, being so crazy; the thoughts that come into my mind.”

It is hard to put Gehry into a box. He doesn’t dislike straight lines. For instance, he loved the Ludwig Mies van de Rohe and Phillip Johnson designed 1958 Seagram building and says he is driven to use curves and folds to humanise modern buildings.

Despite the adoration heaped on his buildings, he retains a healthy insecurity about his work. He told ABC radio a few years ago that every new project was a terrifying experience.

Describing his vision for the Chau Chak Wing Building back in 2009 in a letter to the dean of the business school, Roy Green, Gehry wrote: “Thinking of it as a tree house came tripping out of my head on the spur of the moment.”

“The world we live in, people have got to go through the looking glass constantly. [You] feel like you are in the middle of a Mad Hatter’s tea party. The only thing that is real is being unreal,” Gehry says.

He says he’s Jewish so he feels guilty about everything. “It takes me about two years to come around and I see all the things I want to change,” he says.

Gehry attributes his love of art and architecture to the women in his family. He tells a story about how his grandmother dumped a load of wooden offcuts on the floor and how she made things, and how his mother took him to the art gallery.

It all began back in the 1980s when the obscure industrial Spanish town of Bilbao wanted to build a Guggenheim museum and gave Gehry free reign. The Minister of Commerce and the President of the Basque region said it was a business decision and they wanted the success that the Sydney Opera House had achieved.

Gehry delivered a titanium surrealist structure that shocked the locals. He claims that in Bilbao the newspapers said kill the American. He was worried and thought they meant it.

But according to Phillip Johnson, Guggenheim Bilbao is “the greatest building of our time”. The famous architect was so moved by Gehry’s Bilbao that he broke into heavy sobs. It was Johnson’s extravagant praise of Gehry and Bilbao that gave his fame a huge boost. Other than Utzon, most Australians would be pressed to name an architect.

Back in Sydney, it was a father’s love for his only son that planted the seed for a $25 million gift by a media shy Australian-Chinese billionaire businessman called Dr Chau Chak Wing who contributed to the city’s first Gehry building.

Dr Chau first visited the inner city campus of the UTS near Chinatown when his son, Eric, was looking for the best place to study design.

“Frank Gehry is a courageous, tough and wise old man,” according to Dr Chau.

To the millions who love him, Gehry is a genius, known not only for his imaginative buildings and signature line drawings, but for his wit and humour. He once voiced a caricature of himself on The Simpsons, crumpling up a scrap of paper which then evolved into a version of the massive Walt Disney Concert Hall in Los Angeles for Springfield.

The idea for the $180 million Chau Chak building came to Gehry after he saw the old Dairy Farmers site in an unkempt part of Ultimo in Sydney. Construction began in November 2012, and by the end of February 2015 more than 1630 students and staff occupied the trunk.

The stairs and other areas encourage ‘water cooler’ moments where students and staff cross paths and the building encourages a more egalitarian and collegiate approach to learning.

Staff offices are only nine square metres and pod-shaped small meeting areas branch out, encouraging students to meet on the Herman Miller furniture or stretch out on mats or in window nooks. The classrooms are oval-shaped, while the 120-seat style theatre encourages students to work together in small groups.